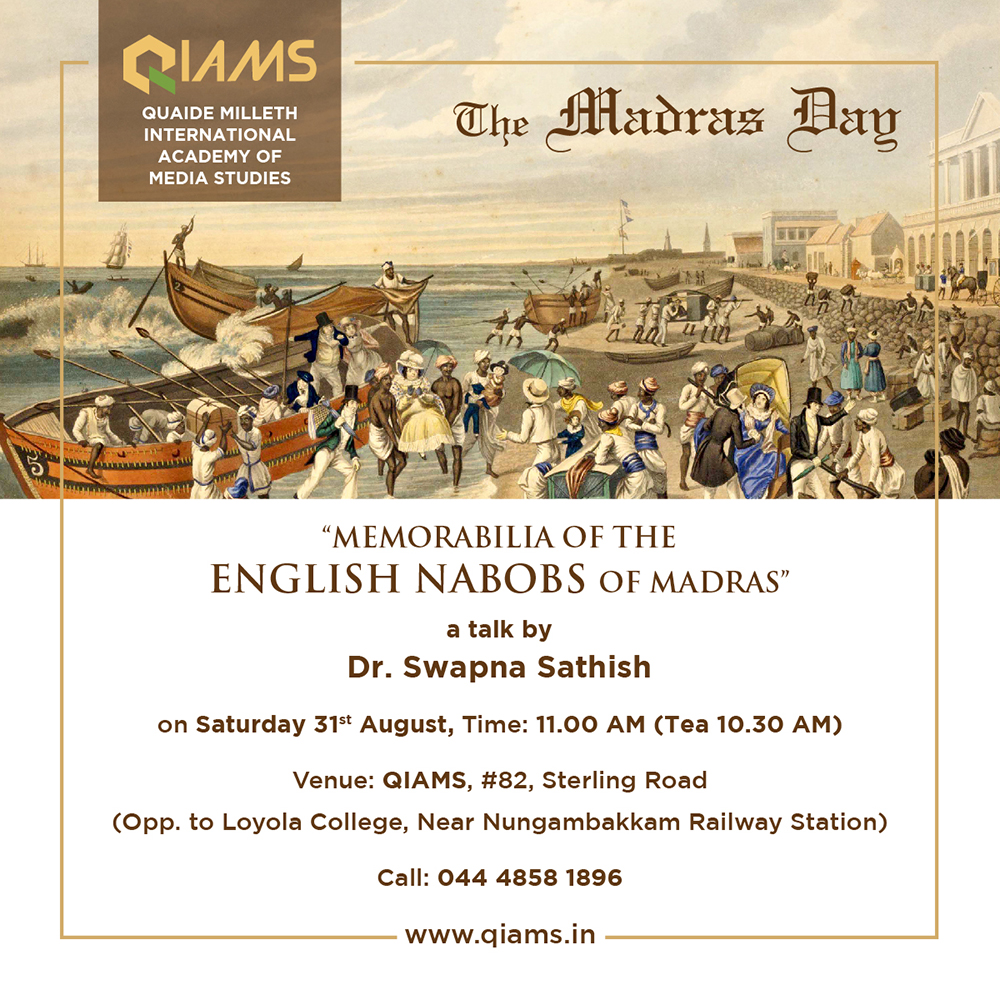 Quaide Milleth International Academy of Media Studies (QIAMS) invites you to a presentation on “Memorabilia of the English Nabobs of Madras” by Dr. Swapna Sathish, Asst Professor, Stella Maris College.

In the context of eighteenth century British India, ‘nabobs’ were “servants of the East India Company who had returned to Britain equipped with ill-gotten prosperity, an insatiable appetite for luxury, and a desire to climb into elite spheres of power and influence.” On their return to Britain, these nouveau riche ‘nabobs’ either bought or built residences that were in keeping with their new standing in society. This presentation focuses on the art and artifacts from the homes of these British ‘nabobs’ with a predominantly Madras connection, considering whether it was the intrinsic value of the objects that engendered these collections, an element of nostalgia or mere showmanship. The link between home and empire can be seen visually in the artifacts that were brought back. These ‘nabobs’ were in effect literally bringing home a piece of India, thus creating material proof of empire as part of nation.

Dr Swapna Sathish is Assistant Professor of Fine Arts at Stella Maris College, Chennai, teaching art history and design for the past 18 years. A freelance art critic, she has authored catalogues, exhibition reviews and contributed chapters to books. She has also presented papers at international conferences and delivered invited lectures in India and abroad. Subsequent to a postgraduate research degree in Renaissance art history from the United Kingdom, Swapna received her doctorate from the University of Madras for her thesis titled ‘Piety and Popularity: Contemporary Temple Murals of Tamil Nadu.’ Her areas of interest are popular culture and 18th century colonial art. She received a Charles Wallace India Trust research grant to undertake post-doctoral research in the United Kingdom. She has served as Honorary Secretary and Treasurer of the Association of British Scholars, Chennai chapter.